Return of the Roman Shades...

I still remember the day back in '09. I woke up one morning and all of my Roman Shade auctions on eBay had been canceled. How could this be? Roman Shades are so aesthetically pleasing, so practical, so...not illegal! I checked my email and to my surprise, eBay notified me that ALL 'Brand X' Roman Shades everywhere had been recalled.

"Huh?", I wondered. "What in the world could be unsafe about something hanging in a window?"

After a bit of research and a not so friendly call to eBay I found that there was an industry wide voluntary recall of Roman Shades and that from here on out, they were banned from eBay in their present form. Apparently, a child had gotten its neck caught in the cords of a roman shade somewhere and was seriously injured from it. 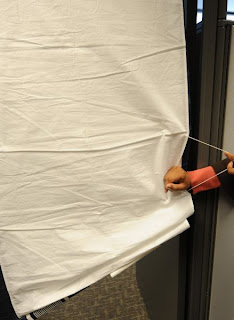 I had a few hundred shades in stock, but after hearing the reason for the recall and looking at the design of the shade it made sense to me. I have kids of my own, I wouldn't want anything in my home that could injure them.

But, what was I supposed to do with the few hundred shades I had in stock at the time?

My little dilemma couldn't compare to what the Roman Shade peeps at 'Brand X' must have been going through. My few hundred shades didn't compare to the tens of thousands of shades they must have had at the time of the recall. So, some heads must have gotten together and come up with a new system that could be an interim solution to this recall issue, while they came up with a permanent solution. The cordless clip system was born...

All the cords were cut and completely removed to prevent children, or people in general, from becoming strangled in the loops. Someone, who was obviously much smarter than I am, came up with these cool clips. The clips are adjusted manually, and while taking a little bit longer to adjust than the corded shades, they were safe. (When I say longer, a pull of the cord can take but a few seconds. The shade can be adjusted with the clips in less than 15.46 seconds.) The clips go through the loops where the cords once were and lock the loops into place to give the same 'Roman Shade-y' effect as the corded version gave...The gathering, the ruffling...call it what you may. 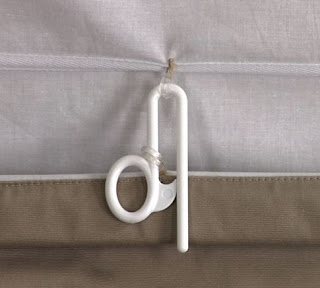 The solution was ingenious! It was also temporary though, while 'Brand X' came up with a more permanent, expensive solution. The permanent solution involves a roller shade, cordless system. They are completely and utterly amazing! They also range in price from $200-$300...each! Go buy some if you have that kind of cash laying around in this 'ruffled-up' economy. (pun intended) 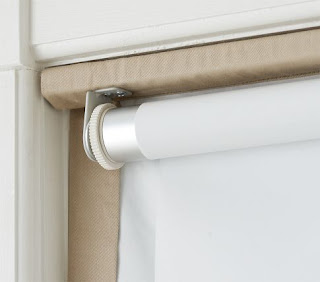 Once this new system was in place, what was 'Brand X' to do with the thousands of shades they had in stock at the time...you know, the ones with the interim clip system? Well, these shades ended up on our shelves in our warehouse. Homeless. Cold. Lonely. Tired.

So, we're putting them up for adoption. They are in perfect condition, in their original boxes with all the mounting hardware you would need. The plastic clips are shiny and new. Detailed mounting instructions are included along with the ingenious interim clip system instructions. No cords to wrap around little necks in these babies! (pun not intended) 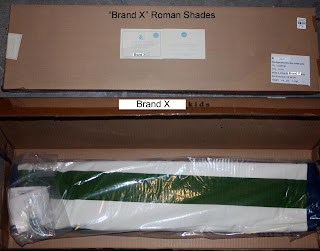 And here's what a few of them look like: 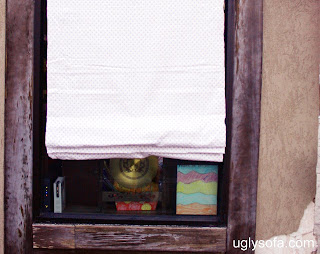 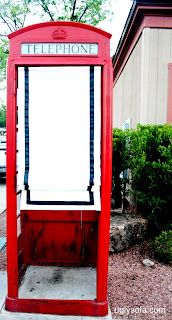 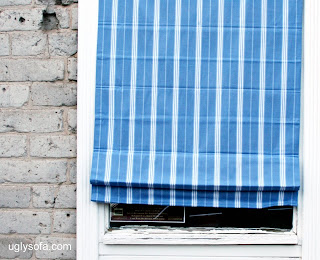 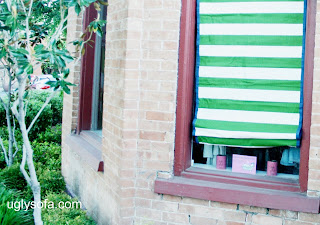 (Yes, we realize roman shades aren't mounted on the outside of homes, or in cool looking telephone booths. They are mounted inside your homes...! But don't let that stop you from being creative.)

Starting at $14.99, we are pricing these to move them. Once they are gone, they are gone...so don't delay. They are kid safe, parent friendly. So, go measure your windows and give these homeless interim roman shades a home!
Posted by Ugly Sofa at 3:47 AM

Promote Your Page Too